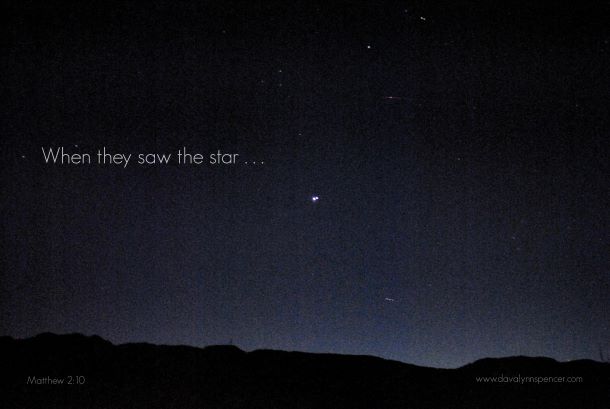 “It wasn’t so much the bright star convergence. It was standing outside in the dark with my camera and tripod – watching, listening, feeling the glory of God – seeing the night sky change, realizing that the God of the manger is the God who set the planets on their courses. The same God who heard me singing in the dark because I was awed by His work . . .

That night, I considered the Magi who watched a particular light against the velvety dark – men who studied the stars, knew the ancient prophecies, and weren’t afraid of crossing deserts and wastelands for a glimpse of a King.

What had they thought more than two thousand years before?

I found my answer in the second chapter of Matthew: “When they saw the star, they were overjoyed.”

Many theologians believe the Magi did not reach the Christ child until at least a year following His birth because of where they found Him and what happened soon after.

“On coming to the house, they saw the child with his mother Mary, and they bowed down and worshiped him. Then they opened their treasures and presented him with gifts of gold and of incense and of myrrh*.

“And having been warned in a dream not to go back to Herod [whom they had recently visited], they returned to their country by another route.”

Joseph, Mary’s husband and guardian of the child he named Jesus, also had a dream that warned him to take his family and escape to Egypt. Thanks to unexpected visitors, Joseph just happened to have the finances to fund the getaway.

Herod, the king in Jerusalem at the time, defended his throne by slaughtering all the baby boys two years old and younger in the vicinity of Bethlehem. You can read the whole story in Matthew 2:1-23.

In modern nativities commemorating the birth of Jesus, we often see richly robed “wise men” kneeling at a feed trough or manger. Innocent at best, it makes a nice creche scene and tells a larger part of the story, yet Matthew’s account gives us a truer picture.

Last week, though I had my Nikon camera and tripod, I wasn’t equipped to capture the starry display as clearly and beautifully as many photographers did. But it was what I felt that impressed me most, what I sensed out there in the dark all alone.

The smallest light penetrates darkness, and I am never alone because the Lord of Light is with me. I sensed great comfort that night, a great peace, an awareness that no matter what happened, He was bigger than all my challenges and was in ultimate control.

In the darkest night – or the brightest day – oh how glad I am that He is.

*Tradition tells us there were three Magi, but the theory is based on the naming of three gifts. There could have been only two or several more. An interesting tale concerning the magi is a short story titled, The Other Wise Man, by Henry van Dyke, first published in 1895. 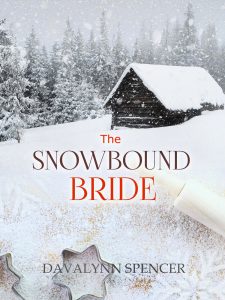 Just inside the barn’s wide door, Ara paused by a new wooden manger filled with fresh hay as if awaiting a heavenly guest. Bending to breathe in the grassy perfume, she closed her eyes and marveled at the simple pleasure. A scuffling step said Buck was near.

“It’s an offering.” He stopped beside her and fluffed the hay with his large, rough hands. “He came to stockmen, you know. Like us. And His ma made His bed in a barn.”

His thick brows rose with hope. “You really think so?”

“Of course. Warmth and shelter and love. The same things we all need. I’m sure He would have been most comfortable in this crib you’ve made.” ~The Snowbound Bride