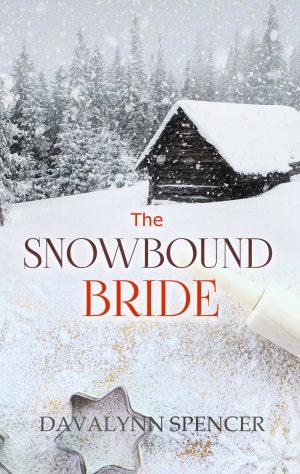 “Ara is winter storm sidetracked from the depot to a remote horse ranch proving ‘blizzard’ can be spelled ‘bliss’, verified by the quote: ‘The heat in his eyes left no doubt.’” –Harold Wolf, Amazon Top 50 reviewer

Arabella Taube clutched her small carpetbag as tightly as her breath and turned her back to the coach car. The man in the brown bowler had watched her all the way from Denver. He was watching her now through the window. She was certain of it.

Blowing snow swirled around her skirts, and the cold nipped at her ears. Oh, to have her trunk and be off to the hotel with the other passengers. She rubbed her jacketed arms as couples claimed their baggage and trudged through the snow toward waiting hacks and buggies. With this delay, there might be no rooms left when she got there.

Stomping her freezing feet against the platform boards, she looked again for a porter. She had assumed the train would press on to Leadville without stopping for the night. “Assumption is the devil’s joke on the unwitting.” Her grandmother’s brittle warning twisted inside Ara’s stomach, and the woman’s disapproving tsks rang in her ears. Or was that the pop and snap of the engine as it cooled?

Horses whinnied and tossed their heads as they pulled from the station. She stiffened against the bluster of wind and panic. She would make her own way without her uncle’s ordering of her every step and Grandmother’s resentful regard—as if Ara could go back and change her parentage. The train heaved a dying breath, and the engineer stepped from his cab. The conductor followed. Where were the por¬ters with her trunk?

The brown-bowlered man exited the car, looked both ways, and skimmed over her as if she didn’t exist. She was not fooled and turned quickly for the depot. An inside bench would serve if need be, but she’d not be ogled by that man any longer.

The fine hairs on her neck sprang like porcu¬pine quills. He was following her. Ladies do not run. She lifted her skirt and quickened her pace. As she neared the depot door, the clerk reached for the shade. Casting off Grandmother’s drill, she ran and grabbed the brass doorknob. “Please,” she mouthed.
He shook his head, jerked a thumb over his shoulder, and dropped the shade. The light dimmed within, and she turned to see the bowlered man a few paces away, lighting a pipe. The flare of his match lit pale eyes that watched her askance. Her stomach knotted. She didn’t know his name, but she knew he was one of her uncle’s lackeys, one willing to do for a price what her uncle would not.

Well, she’d not be bullied back to Chicago to be sold as a bride to the highest bidder. Uncle Victor could solidify his latest business alliance some other way. With tight resolve, she raised her chin and walked calmly toward the end of the building. At the corner, she turned and ran, skirts a-flying, to the nearest wagon. Tossing in her bag, she grasped the side but stopped short at the bared and snarling teeth in her face.
A scream lodged in her throat, but she scuttled to the harnessed horse where she dared draw in a desperate breath. A dinner biscuit from her skirt pocket abated the nag’s nervous whinny. “There now, old girl,” she whispered, her voice betraying her racing heart. A velvety nose rippled over her shaking hand, lipping up the broken bread. “You wouldn’t give me away, would you?” Pulling in great gulps of cold air, she spied the dog watching her from the wagon bed, head cocked and sharp ears pointing. She dug in her pockets for another bribe, but found only a hanky and a paper with the name of the Leadville banker she was to contact upon her arrival. She had to get her belongings, guard dog or no.

Easing closer to the board, she sent up a silent prayer and cooed at the beast. It seemed to warm to her voice and laid its ears down. The tail wagged. “Good boy you are, guarding your master’s wagon. Might I retrieve my bag, please?”

Suddenly the dog crouched and turned from her with a chilling growl as the brown bowler came round the depot. Ara dropped to her knees and crawled under the wagon. Pipe smoke pinched her nostrils, and her chest seized.

The mongrel lunged against the side boards, drawing uncivilized expletives from the man’s throat and distance from his feet. In his fright he dropped his pipe and stooped quickly to retrieve it. Ara feared she’d been found out, but he showed no sign of spotting her and fled the area, leaving a trail of curses behind.

Returning to its previous position, the dog waited quietly for a moment then rumbled a low beckoning. Ara crawled out, peered into the shadows hugging the depot, and slowly straightened. Brushing off her skirts, she spoke again in soft tones.

“You old love. If I had another biscuit, I’d let you have it for sure.” Afraid to pet the animal, she eyed her bag so foolishly thrown into the wagon before she knew what else was there. “Will you let me get my things?”

The ears flattened again and the cur smiled, if that was possible. But in Ara’s unsettled condition, she believed—and hoped—anything was possible and made for the back of the wagon.

Black-and-white paws matched her steps and stopped by the carpet bag.

The dog clamped upon the handle, dragged the bag to the center of the wagon bed, and sat protec¬tively beside it.

A slight woof puffed from the pointed snout.

“We’ll just see about that.” She marched around to the wheel, yanked her skirts above her knees, and climbed the spokes. The dog looked away as if scan-dalized.

Ara stepped into the bed and froze as mangled strains of a Christmas carol rose from the alley, com¬ing her way. She glared at the dog who again seized the handle in its jaws. With no other recourse but to leave her belongings and risk running into her uncle’s shady minion, she dove to the rough boards, flattened against the outer edge, and jerked a loose tarp over her feet and head.

She clapped her hands over her ears. Dismay, in¬deed. Have mercy!

The dog howled then shook the wagon as it bounded to the edge.

A muffled woof and exuberant wiggling indicated its master had returned. A decided tilt as the man climbed to the seat threatened to roll Ara like a Yule log from her hiding place. Whoever he was, he was either rotund or robust. At least he wasn’t the brown bowler.

With a light slap and a hearty “giddyap, ol’ girl,” the mare took to the road. Ara sucked in a dusty breath. Should she rise and call out? Demand the driver take her to the hotel—where there may be no rooms? What if her uncle’s hireling was watching? With a drawn-out groan, the dog settled its warm body against her. O Lord, what had she gotten herself into?

Available from the following retailers. Amazon