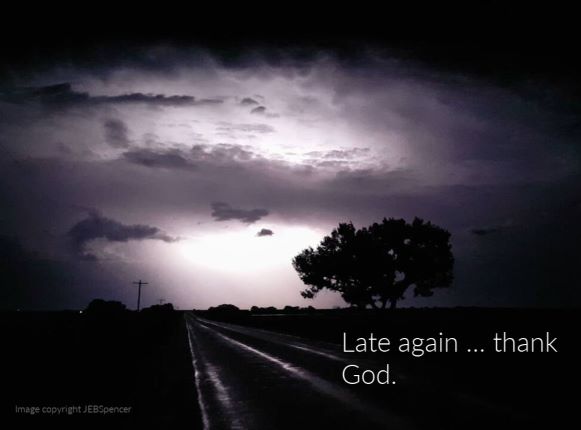 Last Monday I had a 2 p.m. appointment and just enough time to get there.

Then the phone rang with a long-distance call.

And the dog wouldn’t go back in the yard because he was freaked out by an approaching storm. How does a deaf dog know thunder is rolling over the mountain?

Fifteen minutes later as I drove to my meeting (late), I thought back to another time when time made all the difference …

After a long haul from our last rodeo in Turlock, California, we stopped in Lovelock, Nevada, on our way to a rodeo in Charlotte, Iowa – which, according to the map, was on the other side of the planet.

Not really, it just looked that far away.

Mike, my rodeo bullfighter/barrel-man husband was hurting after the Turlock performance because the charge on one of his comedy acts had blown up in his hands. Blistered all the skin on both palms.

But with a bottle of pure aloe vera gel and cotton gloves, he’d driven all the way from Turlock to Lovelock anyway. (Ever try to tell a cowboy he can’t do something?)

The motel was a treat. Our two children swam in the pool, we rested up, then headed out late the next evening because driving across country in the summer was easier on the animals and the kids if we covered most of the distance at night. And Charlotte, Iowa, was still more than halfway across the country.

I took the first shift as the sun set in my side mirrors. I loved driving across the desert at night. Did you know that you can see stars all the way down to the horizon?

The kids were in the sleeper attached to our 2.5-ton International Harvester diesel truck, and Mike reclined in the passenger seat, working on a nap.

Our big truck had five gears and a two-speed rear end which meant a ten-gear routine coming off any and all stop signs. We pulled a 45-foot furniture van we’d converted into living quarters, tack room, and animal compartment, and everything of any value that we had in the world was in that rig.

I settled into my usual speed of 55 mph, the most economical for us in those days. But twenty miles out of Lovelock, I sensed the Lord urging me to ease back to 53.

Not a big difference, so why the big deal? However, I knew that tug on my insides, so I slowed.

About thirty minutes later, an aurora-like glow burst over a rise up ahead. Reflexively, I lifted my foot from the accelerator, and Mike woke up. Just this side of the crest, we came up on a semi and a car pulled off on the side of the road. We did the same.

“Stay here,” Mike said as he jumped out and ran ahead.

When he returned, he wasn’t wearing his shirt. “I’m taking our big towels, the beach towels.”

We were the fourth vehicle to come up on an old station wagon that had stalled just over the rise. The first vehicle was a semi that plowed into that family car full of children.

What I’d seen in the sky a few minutes earlier was the explosion.

Mike worked with the truck driver whose synthetic T-shirt had melted into his skin. It was a while before EMTs arrived, and the highway was closed for hours. The ground trembled from idling semis backed up for miles behind us.

To this day, I weep when I think of those children. And I still wonder if two miles per hour made a difference that night. If it kept us from being the rig that came over the hill unable to stop in time.

When I’m late, when things happen that throw me off my intended schedule, I have to consider if it’s simply coincidence or if it’s God.

We ask Him to direct our steps, so why don’t we trust that He does? I don’t always understand His timing, but I’m learning that He sees the bigger picture and may want me to be late again … thank God.

How about you? Are you aware of a time in your life when a few minutes made all the difference?

A man’s heart plans his way,
but the Lord directs his steps.

Feeling foolish, Eli pushed his cap off and rubbed his head, recalling long cold nights in foreign mountains. A man’s mind could play tricks on him, make him think someone was out there, when in truth, there were many someones out there.

This time the words settled inside him, pulsating like some living thing.

And the voice. He hadn’t listened to it in a while.

The promise was more than a well-delivered sermon from a Sunday pulpit. It belonged to the God Eli had known before Laura moved away. Before the IED blew up the Humvee. Before Pop died.

“I really do want a fresh start.” Confession clawed its way up his throat. Saying it out loud made it real. Tangible. His stomach clenched, his hands fisted around nothing. He desperately wanted to slough off the old and start over.

Lightning split the darkness, and pain slashed the right side of his face. He curled in on himself, clutching his head. The left foot he no longer had shattered and throbbed with every life-spilling pump of his heart. Thunder tore through him with an agonizing cry.

And then it was over.