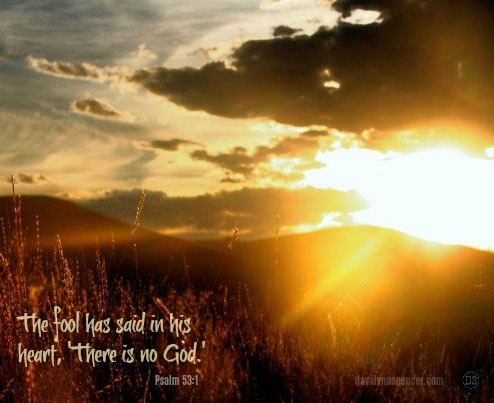 Today is April Fool’s day, observed in many Western nations as an opportune time to play jokes on the gullible and unsuspecting.

I’ve played tricks on employers, family members, and students and have had plenty of tricks played on me. It’s a fun day for a bit of levity that dates back centuries and has several theories of origin for those who enjoy research.

However, the day always reminds me of what a shepherd boy said as recorded in Psalm 53:1 –

That young man lived off the land. He watched the celestial circuit of sun and moon and stars. He warmed himself by campfire in the night, listened to the calls of predators stalking his sheep, and fought them off when necessary. He observed the world around him, knew the seasons and how they changed. He could find water and grass enough for grazing and knew in his heart that a loving God had made it all.

“When I consider Your heavens, the work of Your fingers, the moon and the stars, which You have ordained, what is man that You are mindful of him, and the son of man that You visit him?” (Psalm 8:3-4)

This shepherd was a songwriter, if you will, and his name was David.

The “fools” of our modern-day pranks may momentarily believe false information and fake news. But do they believe there is no God?

Have they watched a horse run in all its unfettered glory? Do they see the sunflower turn its bright face from east to west, following the path of that for which it is named? Have they watched a newborn calf or fawn or lamb suckle its mother with an inborn knowledge of what it should do?

Art lovers and critics have long followed the thumb prints of creators, identifying artists by their technique, their use of light and shadow, their subject matter, etc. The same can be said of authors. JK Rowling tried to write secretly under the pseudonym, Robert Galbraith, yet curious readers noted similarities between Galbraith’s and Rowling’s literary approach, and the ruse was uncovered. Her “voice” was recognized.*

The same can be said of God. Consider the  concept of “three” so consistently repeated in our world:

Our sun – the star itself, light, heat

Primary colors from which all others come – red, yellow, blue

The threefold cord of a basic braid

The threefold chord of a musical key – first, third, fifth

The attributes of the triune Creator are evident in His creativity, for trinity is all around us.

If we are fooled today, may it not be that we are fooled by disbelief. Look around and see the reflection of our God. His fingerprint is everywhere.

The young preacher spoke with such energy and conviction, that the words ignited hope. A new life? Could he really be new, in spite of all his missing parts?

The remainder of the service blurred out of focus as he stared at the pew ahead and analyzed the preacher’s conditional statement. The new-creation promise had a big if attached to the front end.

*Many authors openly write under pseudonyms as a means of distinguishing between different genres.

2 thoughts on “The Fool Says…There Is No God.”