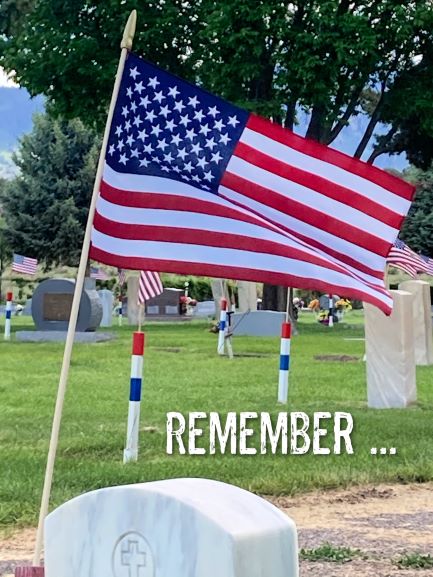 More than a century ago, the Civil War uprooted dreams, decimated families, and divided the nation. Those who survived were determined to remember the price paid by decorating the graves of their fallen loved ones with flowers and flags on Decoration Day. Gradually, the name *Memorial Day became the more commonly used term for this day of recognition.

After WWI, the honor of remembrance was extended to include those who had died in any war during which Americans had served. Battlefields were clearly on the minds of the founders who established this day of remembrance, but many sons and daughters gave their lives on battlefields that were often not recognized as such.

During WWII, countless women went to work outside their homes for the first time, picking up the slack left in the wake of their deployed husbands, fathers, and brothers, gladly joining the war effort.

A young bride was one of thousands of civilians who took to the Long Beach shipyards in southern California while her new husband served on the damp airfields of England.

But it was the husband who came home to a funeral, for the young woman’s lungs could not withstand the ravages of tuberculosis, and she left a toddler in his arms when she died.

Every year on Memorial Day, my husband bows his head for this woman he never knew. The woman who gave him life and ultimately her own for her country.

Others whose names we may not know have given all of what they had to give on a battlefield of mud or concrete, salty sea and riddled skies, or technological minefields cluttered with unseen enemies.

And today, the giving goes on.

This Memorial Day, we would do well to remember with gratitude the fallen upon whose sacrifices we stand. May we live our lives in ways that honor such examples of faith and selflessness.

Greater love hath no man than this,
that a man lay down his life for his friends.
John 15:13

*In 1967, Memorial Day was declared the official name of the federal holiday. The following year, Congress moved Memorial Day from its traditional date of May 30 to the last Monday of May for convenience sake.

4 thoughts on “Remember the Price Paid”