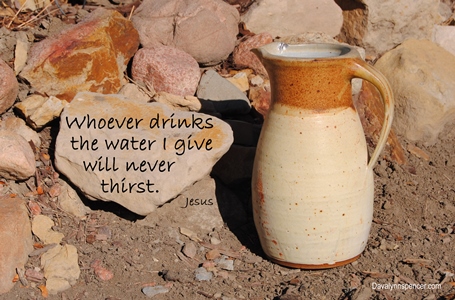 I’ve always liked the story of Jesus talking to the Samaritan woman in Sychar, because it shows how important individuals are to Him.

He’d stopped to rest by a well in the middle of a hot, dry day on his way north, and this woman showed up.

She just inserted herself into the setting – a highly unusual occurrence because women didn’t draw water in the heat of the day. They went to the well in the morning and chatted with each other to catch up on the latest news.

But shunned people like this woman went when no one else was around.

Except Jesus was around that day.

“No worries, he’ll ignore me,” she may have thought. After all, men in that culture did not talk to women in public. Especially Jewish men to Samaritan women. And my guess is that Jesus knew exactly why she came to the well in the middle of the day.

But He didn’t brush her off.

He wasn’t at all like me when I squeeze into an airline seat and stare out the window hoping no one talks to me so I can zone out during the flight.

Or like me in the checkout line at the market, avoiding the eyes of others because I’m in a hurry or bothered about something that needs my uninterrupted thought processes.

Or like me in the post office wearing sunglasses. Easy in, easy out. No chit-chat. I have a lot on my mind.

No, He wasn’t like me at all. He spoke to her, struck up a conversation, admitted that he knew she was living with man number six, but showed no offense or judgement.

And He told her about Living Water and where to find it.

It’s a great story, and you can read it in the fourth chapter of John. 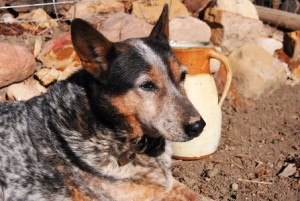 While I was shooting the artwork for this blog post, my dog, Blue, did exactly what the Samaritan woman did. He inserted himself into the picture. He put himself where I wouldn’t miss him—right under my nose. He wanted my attention.

And he gave me a very pointed object lesson that Jesus is still in the business of meeting individuals where they live. In the middle of their need. Maybe in my checkout line at the market, or the seat next to me on the plane.

So now the choice is mine. Next time, will I make the most of what could be a God-ordained opportunity to show a little interest in someone else’s life? Or will I draw into myself and let the other person go away thirsty?

Connect with me through: