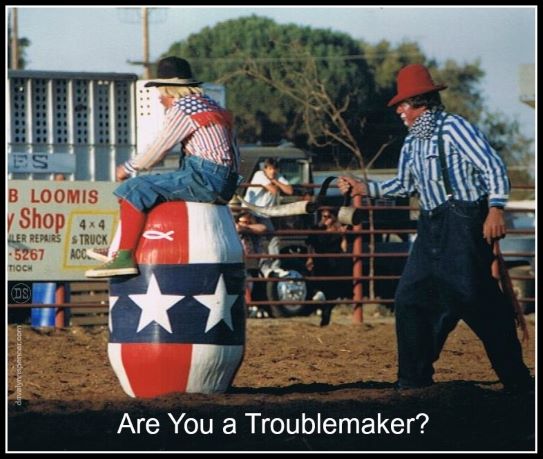 Are you a troublemaker?

Before you answer that question, let’s talk about what a troublemaker is and why sometimes it’s a good thing.

Usually when we think of a troublemaker, we think of that kid in school who was always in the principal’s office. (That wasn’t you, was it?) Troublemakers were the attention-grabbing rabble-rousers. A few never grew out of it.

On the other hand, some people are called to be troublemakers for very specific reasons:

In the picture above, rodeo clown Wilbur Plaugher is making a point with my husband, barrelman Mike Spencer, during the bull riding at a California rodeo. The audience loved it.

As an author, I’m constantly causing trouble for the characters in my novels. No one wants troubles of their own, but neither do they want to read a namby-pamby story about some person with a perfect life who lives in a perfect world.

Conflict-riddled readers need conflict in their stories because they need victory – even if it’s someone else’s.

Here’s an example of starting a story with trouble:

“The shooter did not flinch.”

(Wait, what? What shooter? Who’d he shoot? Or was it a she? Why did he/she shoot? Is someone dead?)

Starting with trouble is a good way to get the reader’s attention.

Jesus was a troublemaker, according to some people. He told stories about fathers forgiving wayward children who didn’t deserve it and employers paying latecomers the same as those who agreed to work all day. He made outcasts into moral heroes and cast religious leaders of the day as the bad guys. The common people loved Him. Religious politicos, not so much.

Jesus upset the status quo when He brought a new perspective of God. He could do that because He was the new way to God, the ultimate sacrifice, the premier gift.

Yes, many troublemakers bring nothing but heartache and grief, but some give us good reason to stop and consider.

Thank God for the troublemakers who have brought laughter, victory, and redemption to the rest of us.

The shooter did not flinch. ~An Improper Proposal

4 thoughts on “Are You a Troublemaker?”