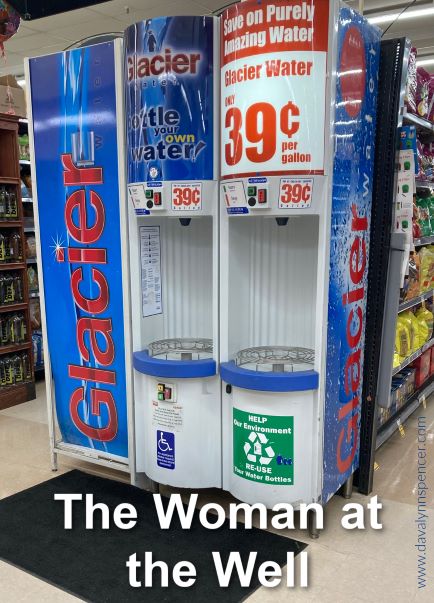 She stood at the water dispenser in the market filling white one-gallon jugs and loading them into her shopping cart. A lot of them. Like fifteen or so.

Wearing a worn jacket and knit cap against the day’s chilly temperature, she kept looking over her shoulder as if nervous about being in the way of shoppers hurrying past.

How Christian of me.

She smiled as I passed and continued filling her gallon containers. Alone.

No one helped her or spoke to her, and I thought little of it until I got home and started unloading my week’s groceries.

The woman rose in my memory like Dickens’ Ghost of Christmas Past.

“Why am I thinking about her now, after the fact?”

I knew why, and it wasn’t pretty.

I hadn’t really seen her in the moment. I could have blessed her with a kind word, helped her fill her containers, or slipped a folded bill into her hand. I could have casually appeared with my cart at her vehicle and helped her unload. Maybe given something from my abundance and tucked it in next to her purchases.

Was I in too big of a hurry? Too self-focused?

What if she was an angel in disguise? (Don’t smirk.)

What if she was merely a lonely woman who needed someone to notice?

What if she was my woman at the well?

Oh God, I have prayed for eyes to see and ears to hear and a heart to understand. In today’s less picturesque language, one would ask to be observant, attentive, and perceptive.

Whatever it’s called, however it’s pictured, oh Lord, I need it.

How often I miss the moment due to an inward focus.

I have so much to be thankful for.

What have you got to be thankful for?

In everything give thanks;
for this is the will of God
in Christ Jesus for you.
1 Thessalonians 5:16

With preparation for the Thanksgiving feast in just three weeks, Etta had little time to dwell on anything else. Thanks to Dottie Dalton, she had a fairly good idea what to expect—food and more food. As the little woman had said when Etta first arrived in Lockton, she’d heard others mention that the Thanksgiving feast was the biggest event of the year.

Of course, there’d be no flags and bunting draping Main Street as they had for the Fourth of July. No horseraces or market wares for sale. Horses would be harnessed to buggies and farm wagons, and jams and jellies, cakes and breads would all be free for partaking during the meal.

However, one tradition had Etta in a fix, for each person present at the meal was to share their greatest blessings from the year. Gracie had been practicing for months, and Etta learned that her list was what she had been secretly writing in her room.

Etta knew exactly what she wanted to say, but feared she’d not be able to get it past her lips.

With a cup of coffee and two oatmeal cookies, she sat down at the kitchen table to plan what dishes she’d prepare for the meal. Bern’s approval of her mincemeat pie set that item at the top of her list, followed by sweet yams, three loaves of fresh bread, seasoned dressing, and pumpkin pies, thanks to the little sugar pumpkins she’d rescued from the garden before the freeze. However, she was running low on spices, a costly commodity but necessary. With what she’d saved from her earnings, she had enough to splurge on cinnamon and nutmeg with plenty left over for a … ~Mail-Order Misfire

4 thoughts on “Woman at the Well”