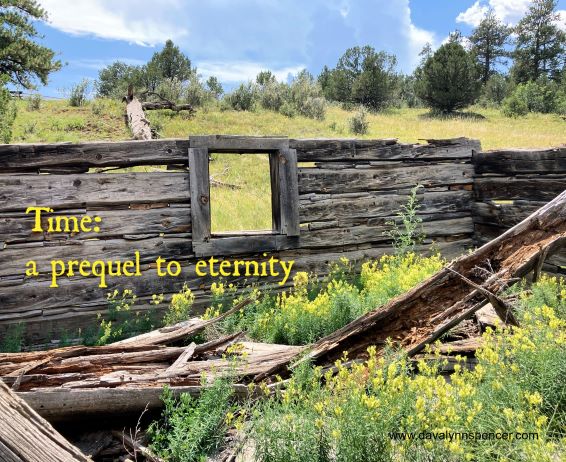 I have often heard preachers and teachers describe our temporal existence as a blip on a radar screen compared to unending eternity. I believe they are correct, based on several scriptures that support their line of thinking.

As for man, his days are like grass,
he flourishes like a flower of the field;
the wind blows over it and it is gone,
and its place remembers it no more.

However, living in this flower of flesh and bone makes it hard to comprehend eternity beyond the “forever” it takes when I wait at the DMV, the post office, or the supermarket checkout line on the first of the month. I suspect the real forever can’t be measured because it is outside of time.

While recently considering the idea of timelessness compared to the instaworld in which we live, a thought slipped through my musings:

“This is just the prequel.”

Authors usually write *prequels to a series after they’ve written the series. The shorter novellas give the backstory for characters’ lives before major events. They also allow new readers a quick taste of what’s to come in the full-length books they haven’t read yet.

However, I believe God plans better than the rest of us. The life we live now is a very abbreviated introduction of grander things to come. And the choices we make now in this brief “moment” will impact how and where we spend eternity.

Viewing this life as a prequel helped settle some unanswered questions for me. It helped me see the continuity of my story – God’s story – and generated even more hope than I had before, based on “the big picture.”

Because of Jesus and His sacrifice, we have a priceless inheritance, “an inheritance that is kept in heaven for you, pure and undefiled, beyond the reach of change and decay.” 1 Peter 1:4

“No eye has seen, no ear has heard, no mind has conceived what God has prepared for those who love him.” 1 Cor. 2:9

Life just got a little more exciting, more filled with promise and expectancy.

If the flowers of the field look as good as they do now, imagine what they look like in eternity.

The first few days of Gracie’s return to school left Etta listless, as if part of her life were missing. Bern was always busy, either preparing a sermon or quelling a quarrel in town. The Eversons had settled considerably, and worked part time for the mercantile owner, making deliveries to outlying homes and ranches. Still, Bern was gone all day, from daylight to dusk. Occasionally, he came in at dinnertime but never stayed long.

Even when she baked or cleaned or worked outside, she missed him terribly. Missed the fledgling feelings that had been growing before she’d insisted he sign that ridiculous agreement. That piece of paper had driven a wedge between them, and she regretted letting Bern know she’d found it in the hearth. No doubt things would have been different if she’d left it there or fed it to the cook stove. Or not written it at all.

But one did not change the past, only the present, which had power to affect the future. Personal experience had taught her as much, and Reverend Fillmore had spoken on it more than once. ~Mail-order Misfire, prequel to The Front Range Brides

*Some memorable movie prequels are: The Good, The Bad, and the Ugly, Bumblebee, and a whole slew of Star Wars films – all written after the original series story.

*Some famous book prequels are: The Magician’s Nephew and The Family Corleone – also written after the original series story. There is heated, scholarly debate over whether The Hobbit is the prequel to The Lord of the Rings, in spite of the fact that it was written first.

2 thoughts on “Time: a prequel to eternity”