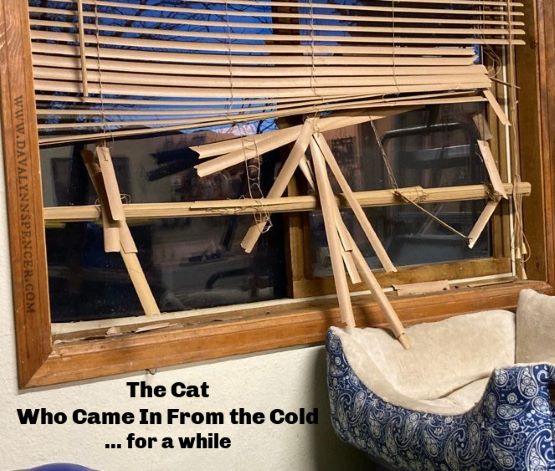 Imagine my surprise when I walked into my attached garage one morning and found the remains of the mini-blinds on the only window in there.

I didn’t know cats could do such damage.

Apparently, they can. Especially if they are feral and resent the ONE time you blocked their exit after they came in the previous night to eat-and-run.

This particular cat is a pretty little tortie (tortoise-shell markings) who showed up last summer with three kittens. We trapped mama and her babies, changed mama’s mind about having more babies in the future, and found homes for the friendly not-yet-feral kitties.

Mama came back here. I call her Annie. She shows up in the morning and evening for breakfast and dinner, but the rest of the time she is very independent. I can’t touch her, can’t even get close to her. But she “talks” to me and likes to hang around when I’m outside.

At first, I fed her near the blue spruce where she hid from the heat. Over the months, I moved the food dish closer to the garage, and eventually inside the garage and up on top of the dryer.

Next, I started working with her on the kitty door (the raccoons figured it out on their own, but that’s another story). Now she comes and goes when she pleases.

When I blocked her exit, she took her frustration out on the mini blinds, didn’t eat a bite, and sat up by the window “yelling” at me every time I entered the garage.

I was hoping she would see what great accommodations I offer: Unlimited food and water, warmth when it’s cold or snowy, and two soft beds from which to choose, both up high with unobstructed views.

Coyotes lurk in the area. Sub-zero temperatures make for brittle winter nights. Rain is wet and wind is tiring. Always hiding gets old.

I wanted her to realize what a great thing it would be to become my cat. My garage and its easy access could be cat heaven, right?

Wrong. The exit is no longer blocked, but she doesn’t spend the nights or cold days inside.

I’ve done everything I can to convince her of my affection other than become a cat myself. How else can I explain to her that I like her and want her to have a better life?

But it’s her choice.

I am the door.
If anyone enters by Me, he will be saved,
and will go in and out and find pasture.
John 10:9

Storm clouds rolled off the mountains, flirting with the rangeland. Clay unsaddled Duster, left the gelding in the barn, and brought the milk cow in as well.

The stallion had worn a path around the inside of the round pen, and Clay slipped through the poles, a cotton lead behind his back. Voice low, he moved toward the center, unhurried but confident. “You want out of here, don’t ya boy?”

Head up, tail flicking, the bay pranced the perimeter, nostrils flaring, one ear swiveling toward Clay and the other toward a sassy white mare a pasture length away. Thunder rolled in the distance.

“Got a big box stall for you and that gal you got your eye on.”

The stallion blew and tossed his head, made another trip around the corral but in a tighter circle, closer to the center.

Clay waited, murmuring low and steady, showing the horse there was nothing to fear.

A couple more trips, and it stopped beside him, eyeballing him, flicking those ears.

Clay held out his empty hand. “Come on, fella. Let’s get in out of the rain. It’s fixin’ to cut loose here any minute.” He slid his hand along the bay’s neck, and its skin quivered at his touch. He stepped closer, his tone easy and calm as he clipped the lead on the headstall, leaving plenty of slack.

Another head-toss but no fight, for there was no constraint. Within minutes, the stallion followed Clay through the gate and into the barn.

After settling the horse in the biggest stall with hay and water in opposite corners, Clay screwed his hat down and picked up two more leads. The smell of rain hung heavy, and thunder growled closer as the storm crawled toward the ranch … ~An Impossible Price, winner of the American Fiction Awards for best Western novel.