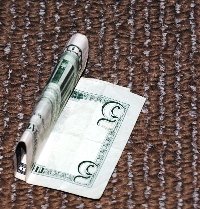 I spotted the bill on the carpeted hospital hallway as I rounded the corner from the rehab unit where I’d been sitting with a loved one.

Instinctively, I reached into my left pocket and felt the few ones and fives I carried rather than fidget with a purse at the hospital café.

Earlier that morning, I’d pulled out a $5 bill for the drive-through carwash. But the line was too long, so I stuck the money back in my pocket. Had I later tugged it out with a restless hand?

What if the $5 belonged to someone else who walked this hall as often as I? Someone who needed it more. What if finding it was a test—by God or security cameras?

Part of me felt it would be poor stewardship of my money to leave it there.

And part of me felt like a thief as I picked up the bill and shoved it in with my double-folded wad on my way to the elevator. Surely God would forgive me if it wasn’t mine.

An hour later as I pulled out of the Walmart store parking lot, I waited for traffic at the main exit where a young man stood holding a cardboard sign: “Iraqi war veteran. Anything will help.”

I didn’t have to fumble with my purse and wallet because the $5 bill slipped easily from my pocket. I rolled down the passenger window and held it out.

Then I turned left onto the road for home.

It didn’t matter if the man was pulling a fast one on soft-hearted shoppers.

It didn’t matter if the man went home to a nice apartment and a girlfriend with a job.

It didn’t matter what he spent the money on. That was between him and God in the same way my act was between God and me.

What mattered was that the $5 bill on the hospital floor made its way to his hand.

“Give and it shall be given to you …” –Jesus