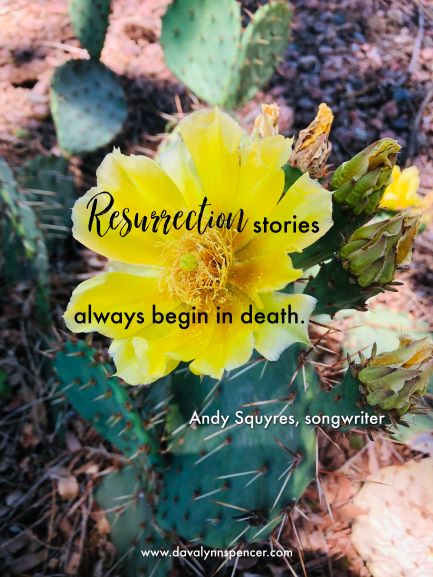 Just because we are believers doesn’t mean we won’t experience loss and pain. It doesn’t mean that sometimes we won’t have all the answers.

But it does mean that we aren’t alone.

Andy Squyres is a songwriter who grabbed my attention in an interview about one of his songs, “Cherry Blossoms.” (*see links below).

I took a deep breath and thought, “Well, of course. Right?”

His comment seemed obvious, but I’d never thought of it quite that brutally because I always wanted to jump over the pain and go straight to the resurrection. I wanted to skip the getting-dead part.

But that’s not how it works, and Andy was right. There is no resurrection without death.

The story key is bringing life back in a new dream, a new hope, a different set of ideas and a stronger grip on faith.

In my everyday life, I don’t get to script the scene. When things go horribly wrong and there are no words but only tears, I weep at the feet of Jesus.

I pour out my heart.

And I can sense His presence in His promise. Feel His breath on my hair.

So what do we say when it all goes wrong?

In the aftermath of tragedy through the birth of a song, Andy Squyres said, “The message of the gospel broke through our sadness.”

That message is what Jesus gave a grieving sister when her brother Lazarus died:

Thank God, I have found that to be true. 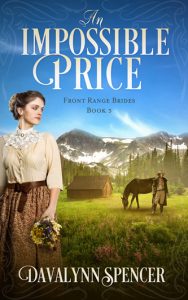 Aware that he was clearly lit by the setting sun, Clay held steady and watched the rider approach. When she rode through the shadow cast by the house, he saw it was Sophie. She looked right at him, like she had at the train station and at church that morning, but instead of stopping, she rode on by and dismounted at the hitch rail.
If his memory served him, that was the same old nag she’d been riding earlier, as well as the first time they met four years ago, and it was just as worn out now as it had been then.
She came around the back of the horse, her left arm curving over its rump, and kept walking toward him until she stopped a couple yards out.
“Hello, Clay.”
Her voice came weary, heavy. Like she’d worked all day plowing a field, but he knew better.
“Sophie. It’s good to see you.” A regular speech-giver he was.
She took a step closer and tipped her head, as if to see better in the fading light. “Are you staying here at Maggie’s?”
“No, I just stopped by to look in on her and ended up staying for dinner and—”
“Look in on her?” Another step. “Is she all right?”
Sophie’s brows worried themselves together, and he fought the urge to smooth them. Brush the loose hair from her temples. Hold her.
He rolled down his sleeves to give his fingers something to do other than what they shouldn’t. “She was resting earlier. I’ve been out here most of the day checking on her mare and tending to the barn. I don’t know if she’s up and around.”
Sophie’s frown eased on its own and she let out a tired sigh.
“Are you staying here?” Depending on her answer, he might take Garrett up on his offer. Then again, that’d be a bad idea.
“Yes. For a day or so. I was in town helping Mrs. Eisner who …”
Her voice trailed off and she looked past him to the pasture, dark now and quiet, and a ragged whisper finished her sentence. “She was with child. Until today after church.”
That was an odd way to put it.
Her breath stuttered and a shaft of falling light caught a single tear trailing her right cheek.
Unchecked pain cut through him, and against his better judgment he closed the distance between them, wrapping his arms around her. She melted into him as if she had no bones. No strength. A wrenching sob broke loose, and he cradled her head against his chest. ~An Impossible Price