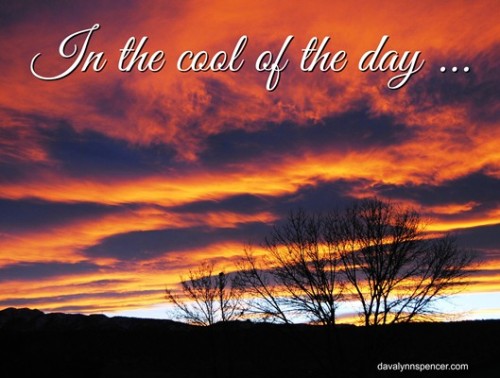 … Adam and Eve heard God walking in the garden and they hid because guilt from their disobedience pressed them into hiding.

God took care of their guilt and disobedience, and we also benefit from His plan through Christ.

However, today I want to look at the God-walking part. Different versions of the Bible express Genesis 3:8 in different ways, though the essence is the same.

I get the impression that God strolled through His marvelous creation to simply enjoy it. Maybe He did this every evening—we don’t know because scripture doesn’t say.

Maybe He often looked for Adam to just “hang out,” but we don’t know that either.

What we do know, is that something happens in the cool of the day. Something intentional.

Why didn’t God come looking for Adam at high noon? Is there something special about those few moments when day slips into night and the earth seems to exhale in preparation for rest?

I believe there is. I believe it can be a time of “unwinding,” letting go, breathing deeply. Instead, it is often the second most hectic time of our modern day-to-day lives. Commuter traffic. Homework. Rushed dinners, the six o’clock news (usually bad). Exhaustion.

Have we fallen into these societal traps and missed an important time of meeting with our Maker during a time when He longs to restore our souls?

Some people walk their dogs in the evenings, go for bike rides, or sit on the patio and enjoy the sunset. It depends on where we live, the time of year, and family responsibilities.

This topic has been foremost in my mind lately—along with other demands of authoring books like writing press releases and newsletters and preparing for book signings.

But as I juggled these demands and my increasing interest in “the cool of the day,” I remembered that I had included just such a moment in “The Columbine Bride” which releases June 1.

Actually, it’s a re-release of the story published last year in e-book form. Next month it comes out in print via Barbour’s complete collection of The 12 Brides of Summer.

I’ve included a portion of that scene below, and I pray that it encourages you to take a few moments in the evenings, set aside the demands and frustrations of your day, and breathe in the presence of the Lord.

Dusk dropped down with a sigh, and shadows tucked themselves beneath rocks and roots as she surveyed the small meadow. Crickets took up their chorus, doves joined with their melancholy song, and Mr. Wellington’s words rolled over the grass. The Lord surely had taken care of her and the children through the long winter. And it had taken most of those months to loosen her grip on resentment.

God had not chosen to keep William alive—a fact with which Lucy was weary of wrestling. Death was not an uncommon visitor in this rugged land, but she’d not expected its sudden and brutal call at her home. Hugging her waist, she closed her eyes and let the evening breeze tug loosened hair and familiar words across her shoulders. Thou wilt shew me the path of life. William had often repeated those words in their evening prayers, and for nine long months she had clung to them in his absence. Had he uttered them with his last breath—perhaps not for himself, but for her and the children? Was it his dying prayer she felt cooling her cheek?

Her job was to live, and to do so, she must accept that God knew what He was doing. She did not have to like it or agree with it. She just had to trust His love. If her children learned nothing else from her, they must learn that.

“Oh Lord, I am willing, but I need Your help.” The breeze freshened and she turned at the familiar caress. William had often touched her just as gently, and habit pulled her heart into her throat. She clenched her jaw. Too easily she could melt into a pool of self-pity. But such indulgence drained her strength and left her weak, and she dare not risk weakness if she and the children were to survive.