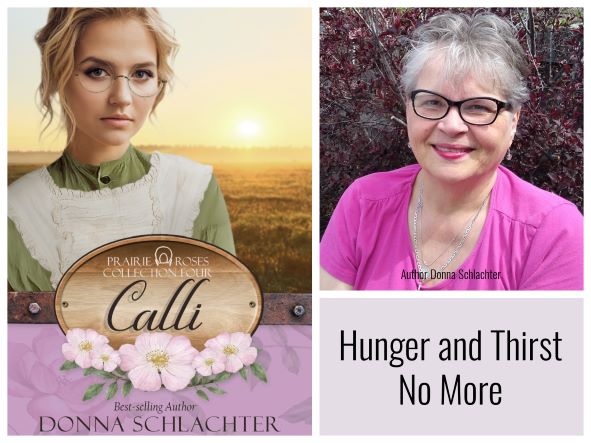 Please welcome author Donna Schlachter today as she shares unusual insight into hunger and gives us a peak at her historical, romantic-mystery novel, Calli.

Scripture tells us that God will use an animal to get a person’s attention. The donkey talked to Balaam (Numbers 22:28) and prevented him from being killed by an angel of the Lord. I believe God uses animals to speak to us today too, although not necessarily in word but in action.

I feed my cats royally. I always top off their food dishes, and I give them treats almost every time they ask. They have me well-trained. I have never given them any bad food.

Each time I feed them, they walk slowly up to the dish, sniffing and looking. To watch them, you’d think I’d set a trap, ready to spring up and grab them. And the hilarious thing is, sometimes they walk away, leaving it untouched for hours. I think maybe they don’t like it, or perhaps the food spoiled since yesterday. But when I get up the next morning, they invariably have licked the plate clean.

They did this recently, and I said (yes, I admit it, I talk to my cats), “Why do you do that? Don’t I always give you good food?”

God spoke to my spirit. “Don’t you act that way with Me sometimes too?”

Busted. God was right, as usual. How many times have I prayed, received an answer, but because it looked different than I expected, I doubted it was from God. At other times, I claimed a blessing from God, but when things didn’t look so great, I recanted on my testimony, saying perhaps I was wrong, and it wasn’t from Him.

God always gives good things. Scripture says, “Every good and perfect gift is from above, coming down from the Father of the heavenly lights, who does not change like shifting shadows” (James 1:17 NIV). God knows how to give only good gifts because He has only good in Him.

When I trust completely in God’s goodness, I know that I need never hunger or thirst again. His Word says so. He will fill my spirit so completely with His presence. 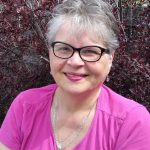 A hybrid author, Donna writes squeaky clean historical and contemporary suspense. She has been published more than 50 times in books; is a member of several writers’ groups; facilitates a critique group; teaches writing classes; ghostwrites; edits; and judges in writing contests. She loves history and research, traveling extensively for both. Stay connected (www.DonnaSchlachter.com )so you learn about new releases, preorders, and presales, as well as check out featured authors, book reviews, and a little corner of peace. Plus: Receive a free ebook simply for signing up for our free newsletter! 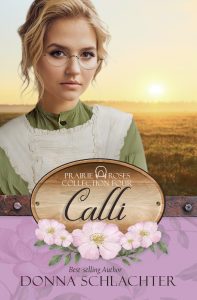 Calli works as a nurse with the U.S. Army at Fort Bridger, Wyoming, in 1880. When a wagon train full of discouraged emigrants passes through on its way east, a pregnant widow delivers her baby then dies. The leader of the train, Bradley Wilson, has few options. He asks Calli to travel with them until they find a relative to take the child in St. Joe, Missouri. Calli, drawn to both this dark and quiet man and the child, resists. But when she disappears, he wonders if she’s run away or been kidnapped. Can these two put their pasts behind them and move into a new future together? Or will Calli insist on having things her own way? ~Calli

Bradley Wilson shielded his eyes from the burning sun and surveyed the trail ahead, thankful to be out of the wagon and stretching his legs. Eastward. He’d traveled this same trail two years before, heading in the opposite direction. What took him back now? Failure? No, more like disappointment. A cloud of dust as big as Kansas, kicked up by the prairie schooners ahead of him, blotted out whatever lay in that direction. Sweat dribbled down the center of his back. He longed to scratch but knew the action wouldn’t satisfy. Instead, he yanked a wrinkled ball of calico from his shirt pocket and swiped at his face. How a body could sweat so much in a land so empty of water was beyond him.

He wished he could guzzle the rest of his day’s ration. Or pour it over his head to cool his fevered brain. But neither would satisfy more than a second and a half. Wasting the precious commodity would haunt him.

Maybe he was too good for his own good.

Isn’t that what those who abandoned the wagon train had said? Right before they broke off on their own, forging ahead instead of waiting for Joe Collins to die? Two weeks it took. Fourteen days of listening to the man keen and holler night and day. And no amount of laudanum eased the pain of his broken back or of his insides in knots, sewn back into place as best his wife could do.

Who knew a horse could drag a man for more’n three miles, and that person still survive? Even if for only a fortnight.

And Miz Collins, ready to drop her first young’un any minute.

Bradley shook his head and double-stepped ahead of his oxen. No, siree. Joe Collins was too good for this world. Along with his widow, Elspeth.

Bradley’s oxen followed the team ahead as if he sat in the wagon and held the leads. He patted the muzzle of the one nearest him, Beau. The off-side lead, Bob, snorted.

The pair, purchased in St. Joseph two years prior, had carried him westward. Away from memories of the war. Hoping to find a better life. Away from his sweet Millicent. And their babe. Both now buried on a hill under a tree in east of the Missouri River. He should never have left them behind. Should have kept them safe. Away from the influenza.

But running wasn’t the answer, as he now understood. And so he returned east, passing wagon trains of the hopeful and the excited and the naïve going the opposite direction every day. Them heading west, toward the new life he’d sought but never found.

Calliope Jeffers—or Calli, as she preferred—leaned over her patient. “You’re going to be fine.”

The woman, a private’s wife, her hair plastered to her forehead with sweat, panted. “Don’t feel like it. Hurts a lot.”

Calli propped the woman’s legs up so her feet lay flat on the tick mattress. “It will be over soon.”

The door creaked open, and an anxious face appeared in the space. The husband. “Is it done yet?”

Calli shook her head. “No, it’s hardly started. Go outside and wait.” She sat on a stool at the end of the bed and tugged a sheet over her patient’s legs. Even in this, she’d afford her whatever privacy she could. “Now, when you feel the next contraction, breathe through it like I showed you. Quick breaths. Understood?”

“Until the pain gets so bad, and my brain stops working.”

The mother-to-be did well until, as predicted, she stopped thinking. Her toes curled, and she bore down.

Time to distract her.

Calli’s eyeglasses steamed up from her own effort and the heat that had built during the day. Whoever thought that married couples should live on the second floor of a barn-style barracks, with paper-thin walls and a one-layer roof should be taken out and shot. She cleaned her glasses with her apron, then donned them again. “That was good. Next time, when you want to push, scream instead. Sing. Holler. Whatever works.”

Even two short years of experience taught Calli it was difficult to bear down and scream at the same time.

Two years. Is that all it was since she moved here to Fort Bridger and taken on her dream job? After graduating from nursing college, most of her class sought positions in city hospitals, hoping to find a handsome doctor to marry.

Not her. At twenty-one, she already had the man she wanted. And his assignment to Fort Bridger afforded her the opportunity to work with one of the best doctors in the territory. Such plans she had. Work. Learn. Have babies.

But then it all ended. Snatched away by a supposed accident.

So she’d had to make a new plan.

And none of it included men, a second marriage, or babies of her own. She sighed and pushed her eyeglasses up the bridge of her nose. Her own babes would be okay, but without the first two, there’d be none of the latter. No, she’d assuage any maternal instinct bubbling to the surface by delivering other women’s infants.