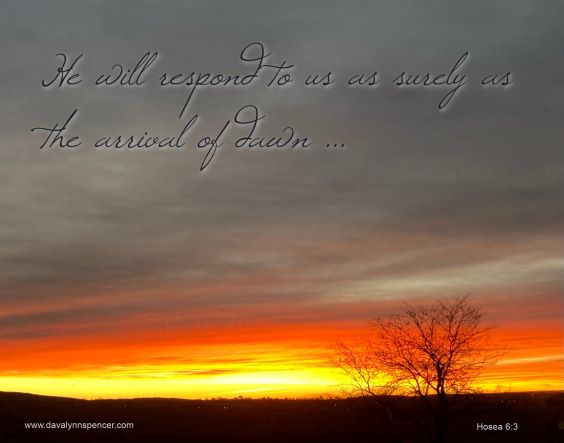 Dawn may be my favorite time of day. It appears full of promise and new possibilities.

Most of my stories present at least one sunrise that catches my characters’ attention and provides a moment of reflection and gratitude.

I also find dawn mentioned during significant biblical events as well, such as the Hebrew’s escape through the Red Sea as recorded in Exodus 14:27, and the arrival of Mary Magdalene and other women at the tomb where Jesus’ body had been laid (Mark 16:2-4).

The Old Testament prophet Hosea compares dawn to the faithfulness of God, but it is an assurance that follows on the heels of stern rebuke and warning.

“My people perish for lack of ___,” Hosea tells his backsliding countrymen.

Do you know what goes in the blank? It’s not faith, as so many think. It’s not hope.

“My people perish for lack of knowledge,” Hosea says to those who turned their back on God (Hosea 4:6).

Scattered through Hosea’s dire warnings of what was to come – and it did – are glimpses of encouragement for those who were paying attention.

“Oh, that we might know the Lord! Let us press on to know Him,” Hosea says. “He will respond to us as surely as the arrival of dawn” (Hosea 6:3).

What a stunning picture of God’s faithfulness. Hosea continues by reminding the people that their busy-ness is not what God wants, He wants relationship:

“I want you to show love (mercy), not offer sacrifices. I want you to know me more than I want burnt offerings (Hosea 6:6).

Last week we talked about how intimately God knows us. This week, let’s evaluate how well we know Him.

In the next few days, pick a morning and rise early enough to see the dawn. Then take a moment to consider God’s desire for relationship with us. What can we do to get to know Him better? 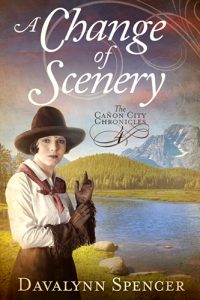 Aching and tight, she watched the east window of her room until the black square dimmed to gray. Against the will of every muscle in her weary body, she pulled the coverlet around her shoulders and made her way to the window. Buildings blocked the sunrise but for a line of blood-red across the open roadway, seeping beneath low clouds. Time slowed, and crimson crept into the cloudbank, firing it from within.

Thou makest the outgoings of the morning and evening to rejoice. The phrase always came to mind at a glorious sunrise or sunset. And she’d always marveled that such a phrase was found in the poetry of the Psalms. Who but one who had seen the splendor could write such things?

Her chest released its frantic grip, her fingers their stingy hold of the coverlet. A new day rose before her. Never before used and carrying promise. ~A Change of Scenery