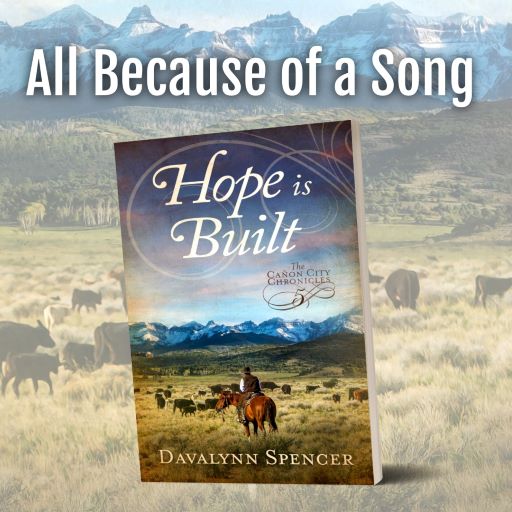 Do you ever wonder how book titles are chosen?

I do. All the time. Because as a novelist, I’m always looking for a good one.

So why would I title my upcoming Western romance Hope Is Built?

Isn’t hope given? Or found?

The phrase “hope is built” caught my eye when I was in the throes of writing. Yes, throes—as in throes of childbirth, throes of war, throes of death.

Rather depressing comparisons, aren’t they? Yet there are days when an author believes she may die from the labor of birthing conflicting personalities and challenges into a readable, relatable story.

As my characters came to life in my imagination and on the page, I saw them struggling and crying, fighting against circumstances and sorrow, and clutching to threads of hope.

The effort resulted in a personal Bible study on the occurrences of the word “hope” in scripture. There are many, and I encourage you to begin your own quest among those ageless pages.

But it was a song that struck the chord in my heart, with lyrics from 1834 written by Edward Mote. He spent his childhood on the streets of London and had no idea there was a God. When Edward learned of Him at the age of 18, it changed his life.

After a long and successful career as a cabinet maker, Mote became a preacher, and continued as such for more than twenty years.

Hope can do that—give someone strength to keep going, perfect their craft, do their best, and share good news rather than bad.

So from the very first line of Mote’s verses came my title, Hope Is Built. You’ll have to read the story to find out how that happened in the lives of Hugh Hutton and Mary Agan McCrae in 1912 in Cañon City.

My hope is built on nothing less
Than Jesus’ blood and righteousness.*

Blessed is the man who trusts in the LORD,
and whose hope is the LORD.
Jeremiah 17:7

A whimper came from beneath the porch, and Mary raised her head. “Finley?” She looked at Hugh, eyes round with fear and regret. “I forgot all about her. Is she all right?”

Hugh whistled for the pup. She slunk from beneath the front steps and crawled up on the porch, tail tucked.

“Oh, you poor dear.” Mary tilted in her reach for the dog, and Hugh circled her waist. She was soft and warm, not trussed up like she’d been when he’d earlier lifted her out of the pit. In spite of the night’s disaster, his mind raced at future possibilities of holding her in his arms in a different setting.

He shook off the image and focused on the barn and keeping Mary upright while she coddled the dog. He watched until the last timber fell, and by dawn, the barn was a pile of smoldering rubble. The pup slept at his feet and Mary in his arms, her breathing even with an occasional quick intake, as if she saw the fire in her dreams.

He prayed that wasn’t the case. She’d lost nearly everything that mattered to her, but losing hope would be the worst. He knew how that felt, and it made a body not want to live.

Mary had to live. She had to laugh and smile and argue with him again. ~Hope Is Built

2 thoughts on “All Because of a Song”