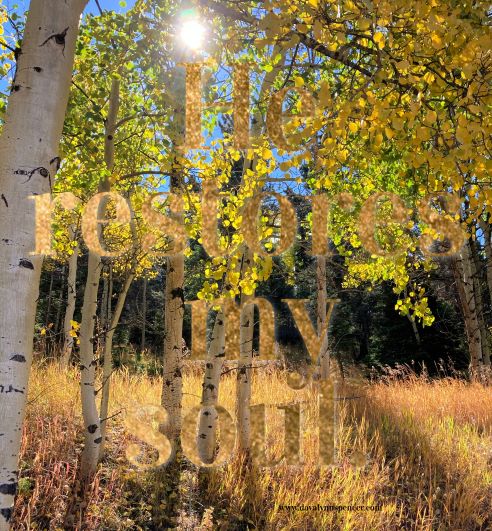 I’m still in the twenty-third Psalm, wondering why the Shepherd has to make me lie down in green (or golden) pastures.

I think it’s because I don’t stop and rest on my own.

I have so much to do.

I don’t have time to rest, so He makes sure I do. And by doing so, He restores me.

The Hebrew word for restore has a lengthy definition including “to turn back again.” To retreat. To build, dig, do something again. Give, call, carry again. The definition gives several examples, but the word again is used 18 times.

He loves us that much.

Sophie drew in the sweet breath of evening—her favorite time of day when earth and animal settled and night birds laced their lonely songs through scrub oak and cedar. A coyote called not far away, answered by another, and soon was joined by a yipping crowd, no doubt celebrating the demise of a hapless rabbit or two.

And the deeper the sun slid into the western peaks, the deeper her conviction grew that the stranger at the depot was Clay Ferguson.

She shook her head to clear his image. He should be the least of her concerns, the one that deserved the least of her attention. But he hovered above all other thoughts like an insistent hummingbird refusing to sink into the shadows where it belonged.

She reined the mare clear of rock outcroppings where snakes sunned themselves by day and cougars ambushed at dusk. But she also kept one eye on the old girl’s ears, for the horse would tell her if danger lurked nearby.

The country was never predictable. Gentle grasslands on one hand, a predator’s lair on the other. Everything around her seemed to sigh in expectation of rest, and she relaxed in her seat. ~An Impossible Price ***Winner of the Will Rogers Silver Medallion for Western Romance

6 thoughts on “He Restores My Soul”