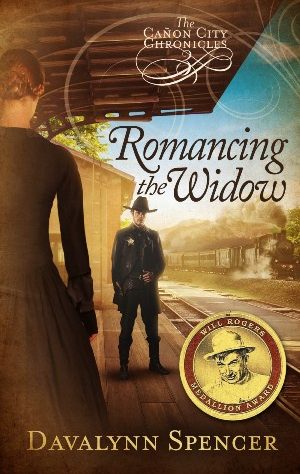 After losing her husband and her hope, a young widow returns to her parents’ home in Cañon City, where she meets a dark and disarming Colorado Ranger.

“I love happy and exciting endings and you will not be disappointed with this one!” -R. Smith, reviewer

“A journey of strength and love that overcomes the past.”  -G. Parker, reviewer

Winner of the 2015 Will Rogers Gold Medallion Award for best inspirational Western fiction.

Martha Mae Stanton yanked the satin ribbon beneath her chin and jerked off the ridiculous black hat. Digging her nails into the fine netting, she ripped the veil away and tossed it on the seat beside her.

A long, hot train ride was one thing. Making that ride while behind a socially dictated curtain was quite another.

Across the aisle, a matron gasped and clutched her reticule to her bulging bosom.

Martha picked up the veil, leaned into the narrow walkway, and dropped the netting on the woman’s shelf-like lap. “Here. You wear it. I’ve had enough.”

The matron sputtered and huffed and swatted the black tulle from her knees as if it were a stinging hornet.

A smile almost made it to Martha’s dry lips but died for lack of sustenance.

She leaned back against the plush green seat and squeezed her eyes shut. The late afternoon sun broiled through her window. Grit dusted her teeth, and perspiration gathered beneath her arms and slid down her back. Late summer had never been so sticky—not in the Rocky Mountains.

Mimicking the matron a half hour later, the Denver & Rio Grande wheezed to a coughing stop at Cañon City’s depot. Steam hissed along the wheels, and a knot tightened in Martha’s neck. She retied the hat as impatient travelers rushed the aisle. Weary mothers herded their petulant young ahead of them, reminding Martha of her former students—and the children she would never bear.

The porter stopped at her seat with a shining smile and tip of his cap. “This be your stop, ma’am. Last one today.”

“Yes—yes, I know.” Through the open door at the end of the car came happy shouts and endearments of reuniting families. She gripped the seatback ahead of her and stood, giving her legs a moment to remember how to proceed.

“May I carry that for you, ma’am?” He reached for her bag.

“No. Thank you.” She curled her fingers into the handle, desperate for something to ground her, something to keep her from running back down the rails.

She made her way to the exit and paused, searching the crowd for her parents.

Caleb and Annie Hutton stood apart, the only two people not huddled with arriving passengers. Upon catching sight of her, a smiling mask formed hard across her mother’s gentle face, one Martha recognized from the countless times her father had dealt with the more unpleasant duties of his clerical calling.

Regret slid from the back of her damp collar and pooled at her waist. Returning had been a mistake. She did not want her family to see her as an unpleasant obligation.

The porter cleared his throat. “You all right, ma’am?”

She plucked at her high collar. “Quite. Thank you.”

Breathing in a dusty draught, she descended to the step and then the ground.

Her father approached and drew her into his arms. Silent. Strong. He held her close, knowing as always exactly what to do.

Her mother wrapped an arm around each of them and bent her lilac-scented hair toward Martha. The fragrance embraced her as closely as her parents and drew her back through the years.

“I am so sorry.” Mama’s whisper fell as gently as her scent.

Martha pulled from their arms and met troubled eyes—her father’s black as her mourning dress but shining with love. Her mother’s burnished and beautiful as ever, though age had etched their corners.

It was a short walk to the buggy, and she and her mother climbed in while the porter helped her father strap her trunk to the back. Settling her carpet bag at her feet, Martha glanced toward the depot’s long covered platform. In a shadowed corner, an abutment jutted from the building and a man leaned against it. Had the sunlight not cut from a sharp angle, she would have missed him in his dark clothing, hat pulled just below the level of his eyes. One knee bent with a booted foot resting on the wall. His thumbs hooked his trousers, draping back a black coat.

It was too hot for a coat of any kind.

She didn’t realize she was staring until he raised his head a hairbreadth and met her eye to eye.

Steeled, perhaps by months of grief, she held his study without reaction, measuring him as he measured her. Lean and alone, like a wolf. So unlike her beloved Joseph.

Dressed in black, as was she in her widow’s weeds.

Her jaw clenched at the phrase, and the tightness coupled like a freight car to her cramping neck. It was bad enough to be shrouded in spirit, bereft and singular after sharing life with a fine and caring man. Her eyes pinched at the corners, dry and tearless. Depleted.

She looked down at her pale hands clutched tightly against the gloomy skirt, as white as Joseph’s still face. The memory seared through her chest, scorching what little vibrancy remained. All her hopes and promises of a future lay buried in a pine coffin.

Her father climbed to the seat, gathered the reins, and tapped old Dolly’s rump.

A shudder rippled through Martha. Cramped as they were, her mother leaned even closer with concern. “Are you ill, Marti?”

The old name rang foreign in Martha’s ears. No one had called her Marti since she graduated and married Joseph three years ago. She glanced over her shoulder as if searching for the name’s rightful owner. The stranger’s eyes caught hers.

Foolishness flooded her cheeks, perhaps a convincing enough sign for her mother to think she was feverish.

“No, Mama, I’m fine. Just—just noticing all the changes in Cañon City.” A flimsy excuse, one sure to wither beneath years of perfected detection.

But the woman had pity on her only daughter and simply patted Martha’s folded hands.

“Yes, a lot has changed since last you were here.”