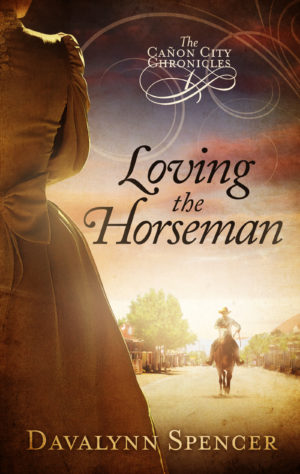 Annie Whitaker refuses to wait for some man to come along and make her life better when she can do that herself. And then Caleb Hutton rides into town.

“Spencer takes the reader into the 19th century and we can smell the coal stove, the mercantile, the barn.”  -K. Parsons, reviewer

(Revised under new title and cover of the formerly released The Cowboy Takes a Wife.)

Annie Whitaker wrapped her fingers around the arms of the front porch rocking chair rather than her sister’s throat.

Of course Edna thought heading for the Rocky Mountains was a bad idea. Everything was a bad idea unless she’d thought of it first.

Perspiration gathered at the nape of Annie’s neck. She uncurled her fingers, relaxed her jaw, and in her sweetest voice, shifted the conversation to Edna’s favorite topic. “Do you have your eye on any particular fella who’s been calling lately?”

Edna stirred the heavy air with her silk fan and lowered her gaze. The porch swing creaked as she toed it back and forth. “Perhaps.”

Annie rolled her eyes, grateful that Edna couldn’t see out the side of her head like a mule. The comparison brought a smile to Annie’s lips and she rubbed her cheek to hide it.

No doubt Jonathan Mitchell topped Edna’s list. He was financially successful, well bred, and handsome in a soft sort of way. Annie fully expected Daddy to turn the mercantile over to Mr. Mitchell when he left next month.

No—when they left next month.

She planned to be on that stagecoach with her father come hel— She pinched off the forbidden word and glanced at Edna, who always managed to read Annie’s improper thoughts.

Why shouldn’t she say that word? It was in the Bible. And it certainly applied to Omaha at the moment, hot and heavy as an unbroken fever.

Heat waves rolled over their Aunt Harriet’s vast lawn and rippled the distant trees into a surreal horizon. Annie unfastened the top button on her thin blouse. She detested summer—particularly July—almost as much as she disliked Edna’s propensity for being coy.

“Don’t be absurd.” Annie released the second button out of spite. “It’s unbearably hot and there’s no one to see besides you and Aunt Harriet. And she’s half blind.” So much for her sweet voice.

“Well, I never.” Edna’s eyelashes whipped up the humidity even more than her fan.

Annie pushed out of the rocker and leaned over the porch railing. Even the copper day lilies bordering the front of the house struggled to hold their heads up.

Edna’s brow glistened with perspiration. “A little warmth does not give a lady license for indecency.”

Tired of the heat as well as Edna’s attitude, Annie spun toward her sister.

“Daddy wants to go to Cañon City and I’m going with him. You can stay here in Omaha with all your beaus and Aunt Harriet if you like, but I’m not letting our father go alone.” She reset a loose pin in her unruly hair, then fisted her hands on her hips. “It will be an adventure. ‘Pikes Peak or Bust,’ they say. All those gold seekers need to get their supplies from someone. Why not Daddy?”

“Humph.” At fourteen, Edna had begun her wrist-flicking. Now, four years later, she had perfected it to a fine art, and the hand-painted silk fan folded in one swift movement. “That’s all you think about—adventure. You and Father both.”

She palmed damp ringlets off her pale forehead and flicked the fan open for a fresh attack. “I can’t believe he’s willing to pull up and take off for those ragged mountains at his age. He should stay here and increase his holdings. The general store is doing quite well. Why start over someplace else and risk losing everything.”

Edna fluttered furiously and aimed a guilt-laden glare. “Including his life and yours.”

Annie folded her arms. Edna’s threat echoed their aunt’s petulant scolding. Aunt Harriet was bound by tradition and the social constraints of widowhood, and she fairly dripped resentment over her brother’s freedom to do as he pleased.

Well, that was Aunt Harriet’s choice, not Annie’s. She preferred to experience all she could, even if it meant risking her life in the Rocky Mountains. Zebulon Pike, John C. Fremont, and others had conquered those peaks. Why not Daniel Whitaker and his younger daughter?

Annie rested against the railing and focused on the window’s beveled edge behind the swing. “I know what and where it is.”

“What it is is uncivilized.” Edna slowed her silken assault, tempered her tone. “You know what that means. They have no law yet, and probably even less order with all those gold-hungry miners and speculators and wild, drunken cowboys.”

“And bank clerks and preachers and store keepers.” Annie pressed her open neckline flat against her collar bone. “Be reasonable.”

An unreasonable request when it came to her big sister.

Predictably, Edna stiffened and assumed a superior posture. “And Indians. You know wild savages live there, as well as all along the way. Don’t forget what the Utes did at Fort Pueblo just six years ago. And on Christmas, no less.”

Annie gritted her teeth, barring hateful words that fought for release. She and her sister had waged this verbal war more times than she cared to count. She refused to chew that piece of meat again.

A rare breeze suddenly swept the wide front porch, and Annie imagined mountain air whispering along high canyons. She braced her hands against the railing, closed her eyes, and recalled what she’d read about the Arkansas River falling from the Rockies cold and full-bellied with snowmelt. A marvelously deep gorge squeezed the river into raging white water and shot it onto the high plains through a wedge-shaped valley. And guarding the mountain gateway, that brand new town, Cañon City.

Oh, to be involved with something new and unpredictable. To see that canyon, and hear the water’s roar—

Edna’s lofty tsk interrupted the daydream. “I know the stories too.”

Annie’s eyes flew open to her sister’s shaking head and mirthless lips. Edna read her mind as easily as a dime novel.

“Do you know that at last count, Cañon City had only 720 residents?” Edna said.

Annie raised her chin. “Daddy and I have discussed it.”

The fan snapped shut. “Do you know that out of that number, six hundred are men?” Edna shuddered.

“Don’t be so sure, dear sister. With numbers like that, I dare say those men are hardpressed to maintain their humanity.”

“This is 1860, not the Dark Ages.” Annie stepped away from the railing, tempted to undo a third button just to see how fast Edna could flail her fan. “We are going, and we are leaving in three weeks with or without your approval—or Aunt Harriet’s.”

She marched into the house and down the hall to the kitchen, where she retrieved the lemonade pitcher from the ice box. No doubt she’d not have such a modern luxury in Cañon City. She poured a glass, let it chill with the cold drink, and then held it against her forehead and neck.

The shocking relief conjured images of clear mountain snowmelt. Goose bumps rippled down her spine. The Arkansas must be delightfully cold, nothing like the Big Muddy slogging along dark and murky on its unhurried journey to the Mississippi.

At nearly a mile high, Cañon City was close to Denver City’s famous claim. That in itself had to present a cooler climate. Much more pleasant, even in the summer. Edna didn’t know that.

Guilt knifed between Annie’s thoughts, and she regretted her snippy attitude. But Edna infuriated her so. How had they both come from the same parents?

A familiar ache squeezed Annie’s heart. That was one thing Edna did know that Annie did not—their mother’s comforting arms.

She doused the pain with a sweetly sour gulp that quite reflected the two Whitaker sisters. Annie thumbed the corners of her mouth, certain that she was not considered the “sweet” one of the mix. She and Edna were no more alike than the dresses they wore.

Was that the real reason behind her determination to go west with Daddy?

She slumped into a kitchen chair and traced the delicate needlework on the tablecloth. Several eligible young men called on fair-haired Edna. But no one called for the wild-maned Annie.

She pushed a loose strand from her forehead as tears stung her eyes, bunching up for an ambush. Swallowing the dregs of jealousy, she whispered, “Forgive me, Lord. Help me love my sister. Even if I don’t like her very much sometimes.”

The screen door slapped against its frame, and Edna’s full skirts rustled toward the kitchen. Annie rushed to the icebox and filled a second glass with lemonade for her sister, hoping the gesture would ease the tension between them.

It was the least she could do.