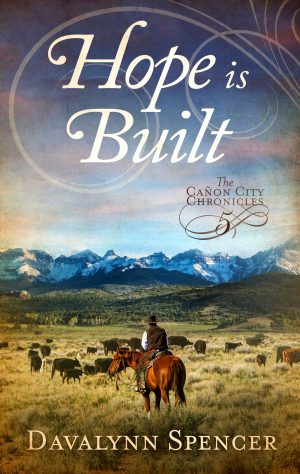 Book 5 of The Cañon City Chronicles

In 1912, irascible rancher Hugh Hutton meets his match in fiery Mary Agan McCrea, but more than just his temper goes up in flames.

She’s running from a planned future.
Mary McCrae flees the life her brother oversees on the dairy and heads West to Colorado only to learn her aunt and uncle have died and left their farm to her. But there’s more on the land than orchards and good grazing, and others will do anything to get it. That is, if a cantankerous neighboring cowboy doesn’t get to them first. He wants the land himself, but Mary keeps falling into danger and he keeps coming to her rescue.

He’s hiding from a broken life.
Hugh Hutton buried one good woman who left him with three sons and a ranch to run. The flame-haired eastern filly who shows up on a neighbor’s farm is not what he planned to spend his future on. She’s inherited the grazing land he wants for his family’s herd, but danger dogs the gal. He doesn’t have time for a woman who’s after the same thing he is, and he doesn’t have time for second chances. Especially not at love.