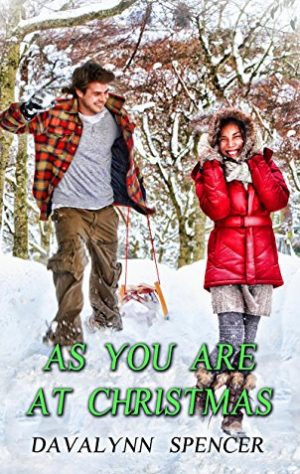 Angela Murphy’s plans for a cozy Colorado Christmas shatter when she finds her fellow-teacher boyfriend entangled with another woman. But she goes home anyway—to her grandmother Mollie’s Berthoud Boarding House where she’s forced into tasks with Mollie’s handsome new boarder, Matt Dawson.

While temporarily rooming at the boarding house until his new furnace arrives, Matt sees through Mollie’s manipulations to pair him with her granddaughter, but he can’t complain about spending time with the beautiful gray-eyed school teacher and the mangy stray they pick up on their way home from cutting a Christmas tree.

In the company of both a beauty and a beast, Matt understands more clearly the words of a long-forgotten youth leader. Will those words draw him back to a long-forgotten God? And will Angela find that home lies not in the Victorian house of her childhood, but in the arms of the man she’s grown to love?

Angela Murphy squeezed her eyes tight against the invisible onion mist and prayed she wouldn’t slice her fingertips off with the next few strokes. Why did she always get the job of dicing onions for Mollie’s sweet onion jam? Angela rubbed her sweater sleeve across her watery eyes. Over the years she had tried everything to prevent the sting—from holding a slice of bread in her mouth to cutting the onions under water. Nothing helped, so she cried her way through the process. But this time, the onions served as a perfect cover for the waterworks coming from her heart.

“Angie, dear.” Mollie padded into the kitchen and stopped at the stove to check on supper. She lifted the cast-iron lid from her stew pot, peeked inside at the simmering Swiss steak and then looked at Angela. “You about finished with those rascals?”

Mollie walked over and swept the onion skins and end pieces into her apron and peered into Angela’s face. “He’s not worth those tears.”

Angela glanced at the diminutive woman and forced a shaky smile. “You’re right. He’s really not. But it still hurts.” How did Mollie always know if a tear was real?